The Secrets of the Precious Filigree Art: Origin

Filigree is one of the most delicate types of jewelry metalwork, which generally uses precious metals, like gold and silver, in art pieces created with small and detailed beads and twisted threads fused together or onto an object. It is ideal for arabesque designs. Its fragility often makes us remember the texture of lace. Traditionally, this technique is connected to luxury design and fine craftsmanship. Humans always tried to exhibit their wealth and status, soon they discovered that the shining gold was the perfect medium for it.

Filigree Rosette Bangle by Arabel Lebrusan. Photo: ©Not on the High Street

This ancient technique creates artworks with the finest beauty, often giving us the impression of being made with lace. Nowadays, it remains popular in India and Asia. In the past, it was common in Italy, France and Portugal, from 1660 to the late 19th century. In that time, filigree became very popular in the French fashion.

Its name, “filigree”, derives from the union of the Latin “filum”, which means “thread”, with “granum”, which means small bead. Filigrana is the Italian name for this art, while filigrane the French one. Not only filigree is still a wonderful and renowned jewelry technique in contemporary design, it was always, since ancient times, a key part of the art pieces made by the jewelers, as we can see in the masterpieces created by the Etruscans and the Greeks. From the 6th to the 3rd century B.C., it is said that filigree reached perfection.

Filigree has its origin in Mesopotamia and Egypt. From Asia it was exported to Europe. Thanks to archaeology we could find evidence in ancient Mesopotamia relics that filigree is incorporated into jewelry since 3.000 B.C. There was even a special form of filigree in Midvat (Mardin Province, Mesopotamia), that used silver and gold wires. This technique was called “telkari” and it is still used by local craftsmen until this day.

One of filigree’s most popular ways of decoration, the granulated work, created with tiny breads and globules of gold soldered to form patterns on a metal surface, was applied by Mesopotamian craftsmen, but Sumerians were probably the first ones to practice this technique of metalwork.

Egyptian jewelers also worked with wire. However, they were only interested in precious metal chains, filigree art was not very popular among them, it was rare. Examples of round plaited gold chains of fine wire, similar to those made today in India, can still be seen around the world and are known as trichinopoly chains. These chains are often decorated with tiny fishes and other detailed ornaments.

Bracelet with Egyptian Panels made in silver. Photo: ©Property Room

The filigree designs from India and central Asia seem to be the most ancient ones and survived until today without any major changes. It is unsure if the Asian jewelers were influenced by the Greeks that came to their continent or if they were trained by them, but the truth is that Indian filigree artworks use the same patterns as the ones from the ancient Greeks and exactly the same techniques.

The filigree workers were itinerant, they tried to find gold, coined or rough. Then, they weighed it, heated it in a pan of charcoal, compressed into wire and finally worked according to the designs of the master artisan. In the end, the final product was weighted, and the artists received their payment. 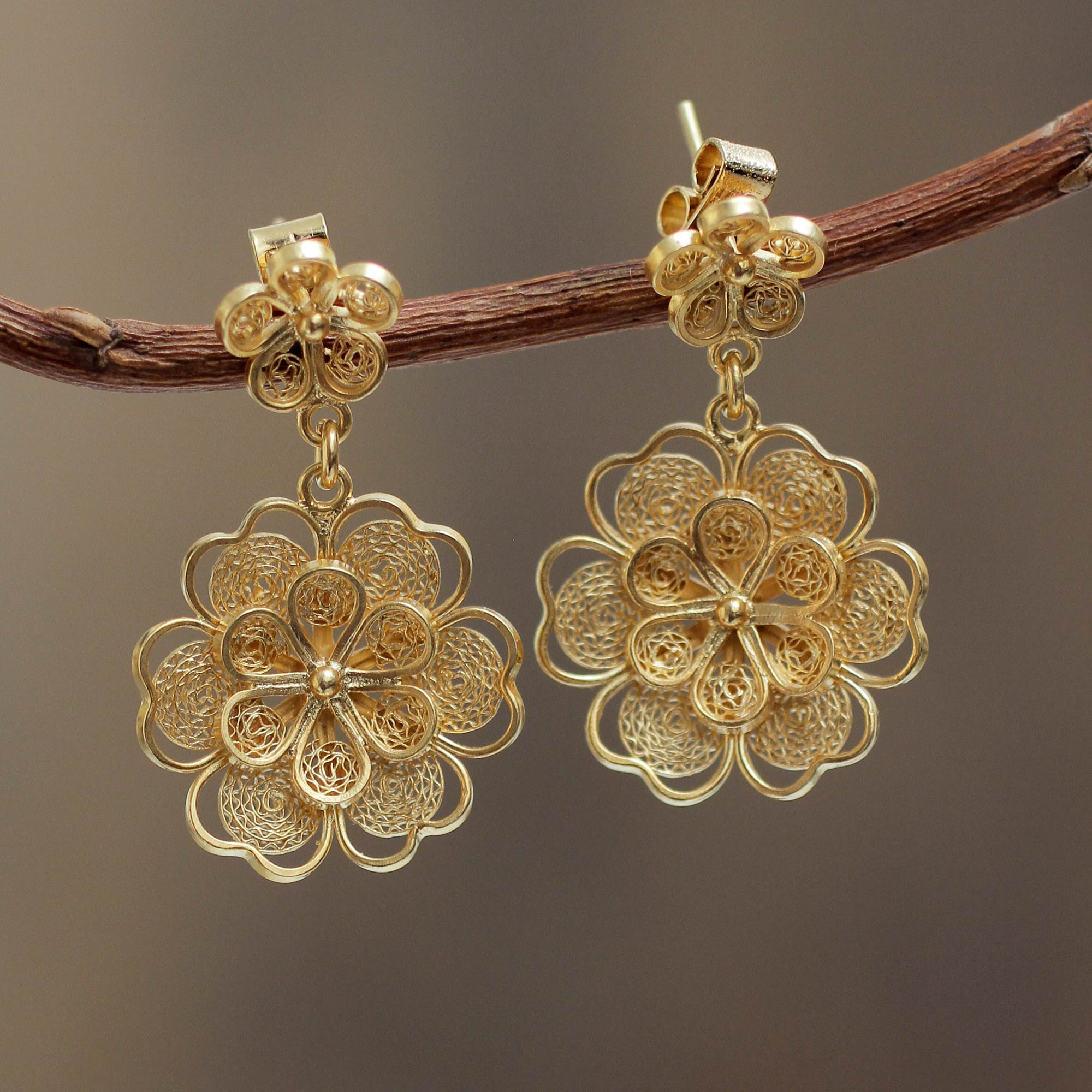 The fine grains, beads and spines of gold, barely with the thickness of a hair, were utilized and still appear in contemporary designs.

Tarakashi is a traditional filigree work created in Cuttack, from the eastern Indian state Odisha. These art pieces often used the images of the divine as inspiration and today are disappearing due to lack of support. The Silver Filigree of Karimnagar in Telangana state is going through the same path.

In Bengal, the karigars, revered by being the best makers of jewelry, are a huge part of the countries’ culture. Nowadays, the Indian jewelry industry is inspired by the Odisha’s heritage. Gold filigree figures are still shining brightly, an average 200 kilos of gold per day is crafted by the artisans. Jewelry from India is desired by other countries, including Egypt, Saudi Arabia, Iran and Iraq. Today, Bengal is the center of this art and craft in India. Gold filigree is still very popular, probably thanks to its cost-efficiency, its design and its detailed craftsmanship.

In Odisha, master artisans usually work with silver and focus only on handmade production. The influence of the filigree craft and design was also crucial in the gold designs of places like Gujarat and South India. Diamond and gem jewelry are rising, but filigree remains as a favorite.

Stay with us to find out more about this breathtaking ancient art all around the world.

Reliquary made of silver and gold plated. Photo: ©Holyart

Elegant Craftsmanship by Boca do Lobo at Maison et Objet 2019