Craftsmanship: The Most Exquisite Italian Arts and Crafts

There’s no doubt that Italians are talented craftsmen and creative designers, their artistic and artisanal excellence is known all over the world. From Ettore Sottsass‘s quirky Memphis furniture to Gio Ponti‘s lustrous pieces, Italy has been a leader in innovative, beautiful, and high-quality design for decades. There’s a reason why isaloni (Salone del Mobile.Milano), one of the best and most notorious art and furniture design showcases in the world, is based in Milan since 1961. Italian Craftsmanship always was internationally celebrated.

Brianza, for example, is considered the craftsmanship-design district, halfway between Milan and Lake Como. It is a mesmerizing place, in which over the past two centuries noble and affluent families built many villas. These constructions required the skillful hands of master artisans and experts which furnished the breathtaking houses. This is the motive why such a fine and precious know-how survived there, as a crucial part of the region’s legacy. Some traditional craftsmanship knowledge can’t even be found anywhere else in Italy.

Brianza’s Traditional Furniture. The finest craftsmanship “Made in Italy” conquered the world with its high-quality furniture. Photo: ©Vimercati

In Brianza, tools and materials become part of the master artisan’s life. Each time he shapes his piece, he puts his soul into it, he leaves a part of himself inside every craftsmanship masterpiece his hands create. Photo: ©mayanova

Since the 1950s, design entrepreneurs come to this area to collaborate with famous Italian and foreign artists, bringing to life of iconic furniture and lighting.

All the best Italian-made craftsmanship products merge together traditional craftsmanship and technology in an extremely detailed and almost perfect way. Artisan expertise has an irreplaceable value which allows delicate finishing details and final touches in all manufactured pieces. Human hands are capable of sensitivity and emotion while maintaining almost industrial precision.

Each hand-crafted art piece is truly unique, since it is not being mass-produced. Every small little detail embraces the authenticity of its material and maker, a perfection in each flaws are features.

Thanks to the nonstop evolution of technology, there are a million ways to use chemicals, for example, to tan leather. However, the best leather in the world is made by Italian tanners who use millennia-old traditions of au natural liming and dying. The result is a material that’s sturdier than any other on the market, as we can see in genuinely Italian-crafted shoes, which all have also a beautiful hand-painted finish. Also, most fabric mills use water that’s saturated with salt and minerals, which leads to fabric that’s covered in a thin, color-quashing layer. But Italian fabric mills are usually located in the North, an outstanding region in the south of Swiss Alp glaciers. Craftsmanship italian mills use pure water to produce fabric, that’s why you won’t find a single thread covered in undesirable substances.

It has been over 50 years since Tarcisio Munari founded the Munari company, preeminent in the field of backpacks, cases and leather bags in the 80’s. Since 1990, Munari has been developing its business in the office supplies, particularly with leather and leatherette desk sets, attaining ambitious goals and international awards and achieving a world leadership in this specific area. These notable brand and know-how, all italian, have been acquired and developed in 2012 by the Italian company ORNA (Verona), remaining faithful to craftsmanship and creativity and, at the same time, conforming to innovation and market demand.The 100% made in Italy production include professional bags, desk sets and accessories such as notepads, desk pads, letter cutters, paper holders, among others. Munari, a very well-known brand in the leather manifacturing, a choice of excellence, style, quality and craftsmanship, all made in Italy. Photo: ©Munari

Some companies have been around longer than entire nations. In fact, Vitale Barberis Canonico, a family-run fabric mill in Biella, the main textile supplier for the tailor maestros at Zegn, is working for fifteen generations, since the 1600s.

Handcrafting any piece is a slow and detailed process, which requires a burning passion for craftsmanship. Artisans are almost wizards, dedicating their lives to the magic of building extraordinary art with their own hands. A hand-crafted project can take weeks, months, years to be finished.

In 2009, the Italian parliament passed a law prohibiting the use of the phrase “Made in Italy” on any product label unless the product is actually made in Italy, from start to finish. This was a strategy to protect the country’s precious reputation as a creator of the finest craftsmanship products.

From the columns of ancient Rome to Michelangelo’s David, style is carved into the stone of Italian life. There’s even a term for it: “La belle figura”, which literally means “the beautiful figure”, yet represents a life style admired and followed, a trend, at all times and in all ways.

From Leonardo da Vinci to Poltrona Frau armchairs, from Armani and Prada to Tiramisu cake. Italians have several beautiful specific products of the highest level made by small producers, artists and artisans everywhere in the country. Pursuing a family tradition, innovating, creating, finding new styles and raising quality is in the Italian blood, characteristics which will lead the country to a bright future. “Chester One Sofa” (1912) by Renzo Frau to Poltrona Frau. The vegetable horsehair of the padding in the backrest and armrests is hand-modelled. The springs are eight-way springs, tied by hand and supported on jute webbing. Photo: ©dreamdesign

One of the most relevant examples of Italian excellent craftsmanship is the Venetian Glass, created for over 1500 years and with a production focused in the island of Murano since the 13th century. Nowadays, Murano is known for its artistic glassworks, but it also has a long history of innovations in glassblowing and is Europe’s major glassmaking center. During the 15th century, Murano glassmakers created cristallo, and almost transparent glass, considered the finest glass in the world. They also developed a white glass called lattimo which resembled porcelain. Later, Murano also became Europe’s finest mirror’s production center.

“Flowers of Murano” is a unique and exclusive stool created using the highest quality glass from the Italian Murano island. It is the reinvention of ancient craftsmanship techniques, such as glass blowing and glasswork, in a contemporary design, inspired by natural elements. Designed by Joaquim and Marco Costa (Project CULTURE) and created by Salviati. Photo: ©Covet Foundation

Venice was controlled by the Eastern Roman Empire, but eventually became an independent city state which flourished as a craftsmanship trading center and seaport. The city’s alliances with the Middle East created opportunities for the glassmakers to learn with more advanced countries as Syria and Egypt. Venetian glassmaking factories existed since the 8th century, but they started to be controlled by Murano in the beginning of 1291.

Glass factories often caught fire, so removing them from the city and locating them in an island avoided major fire disasters for the populations. It is known that Venetian glassmakers protect secret recipes and methods for making glass, which are still treasured in Murano.

The island popularity peaked in the 15th and 16th centuries. Venice’s dominance in trade along the Mediterranean Sea created a wealthy merchant class that was a strong connoisseur of the arts. The demand for glassworks increased. The spread of glassmaking talent among Europe eventually lessened the importance of Venice and its Murano glassmakers, especially since Napoleon Bonaparte’s defeat in 1797. However, Murano glassmaking began to recover in the 1920s and today the island is home to numerous glass factories and a few individual artists’ studios. Murano’s Museo del Vetro (Glass Museum) in the Palazzo Giustinian showcases the history of glassmaking as well as glass masterpieces from Egyptian times to the present day. 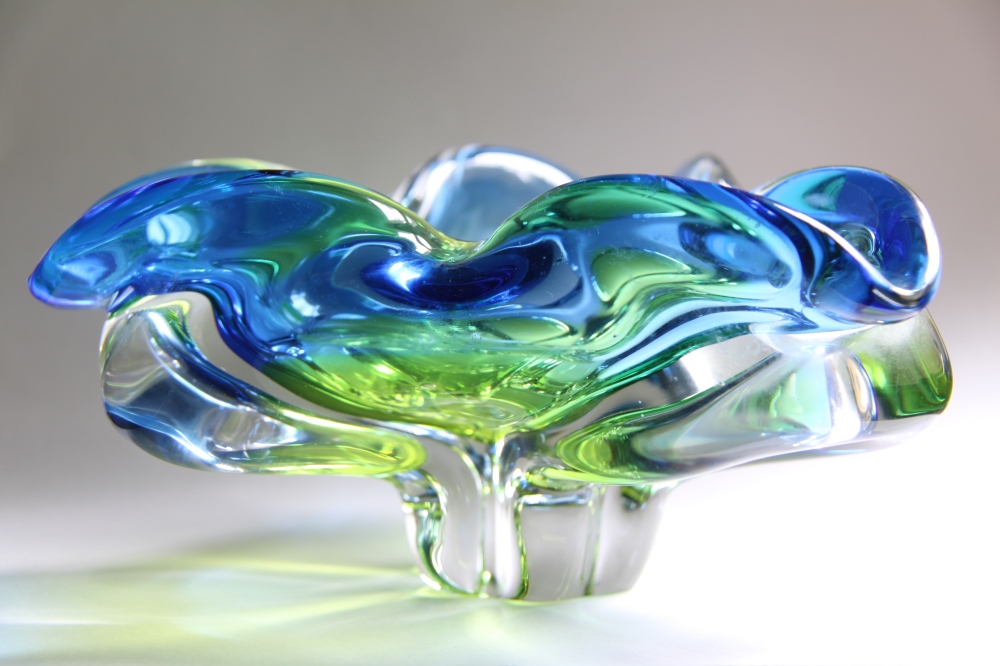 Among many incredible Italian master artisans we can refer Piero Fornasetti, a painter, sculptor, interior decorator and engraver who lived most of his life in Milan. He attended the Brera Art Academy from 1930-32 and created more than 11.000 art pieces, many featuring the face of a woman, Lina Cavalieri, as a motif. Fornasetti found her face in a 19th-century magazine. Other usual characteristic of his work include the heavy use of black and white, the sun and time. His style evokes Greek and Roman architecture, by which he was heavily influenced. Nowadays, it is frequent to see Fornasetti’s style in fashion and accessories such as scarves, ties, lamps, furniture, china plates and tables.

Simone Cenedese, one of the best Italian master artisans dedicated to glass sculpture, started working in a glass furnace created by his grandfather when he was still a boy. Through his work, Simone got involved the family tradition of glasswork and gathered the key elements required for developing this art and creating designs. Artistic ability, creativity and the mastering of refined and exclusive techniques as well as the use of a wide chromatic range of pure and brilliant glass have developed into new ideas, creations and projects.

Massimo Lunardon began his artistic career as glassworker and lampworking artist  in 1988. He gained experience in glasswork and glassmaking workshops and from numerous collaborations with studios, artists, designers and architects. Interacting with different materials and people fueled his desire to experiment and push the traits of glass to their limit and beyond. Massimo’s ability to find the infinite possibilities of glass resulted in companies and private collectors from diverse sectors calling him to create original works.

Cesare Toffolo is one of the best Italian master artisans focused in glass sculpture and lampworking. Born in Murano in 1961, he grew up amongst a family immersed in glassmaking traditions. His grandfather, Giacomo, was a master glassworker who worked for Venini. Giacomo taught Cesare’s father, Florino, numerous techniques of glassworking, and Florino also joined the Venini glassworks at the age of 17. Florino then started to experiment and work with lampworking, gaining the respect of traditional glassworkers on Murano. It was then Florino’s turn to pass his knowledge to his son, Cesare.

The italian master artisan Simone Crestani specialized in glassworking is known as one of the best craftsmen in Europe. He started working with glass at the prodigious age of 15. After a ten-year approck” width=”2560″ height=”1707″ /> Craftsmanship: Catch Rock table lamp by Lindsey Adelman for Nilufar